From sparks to LED: The lighting history 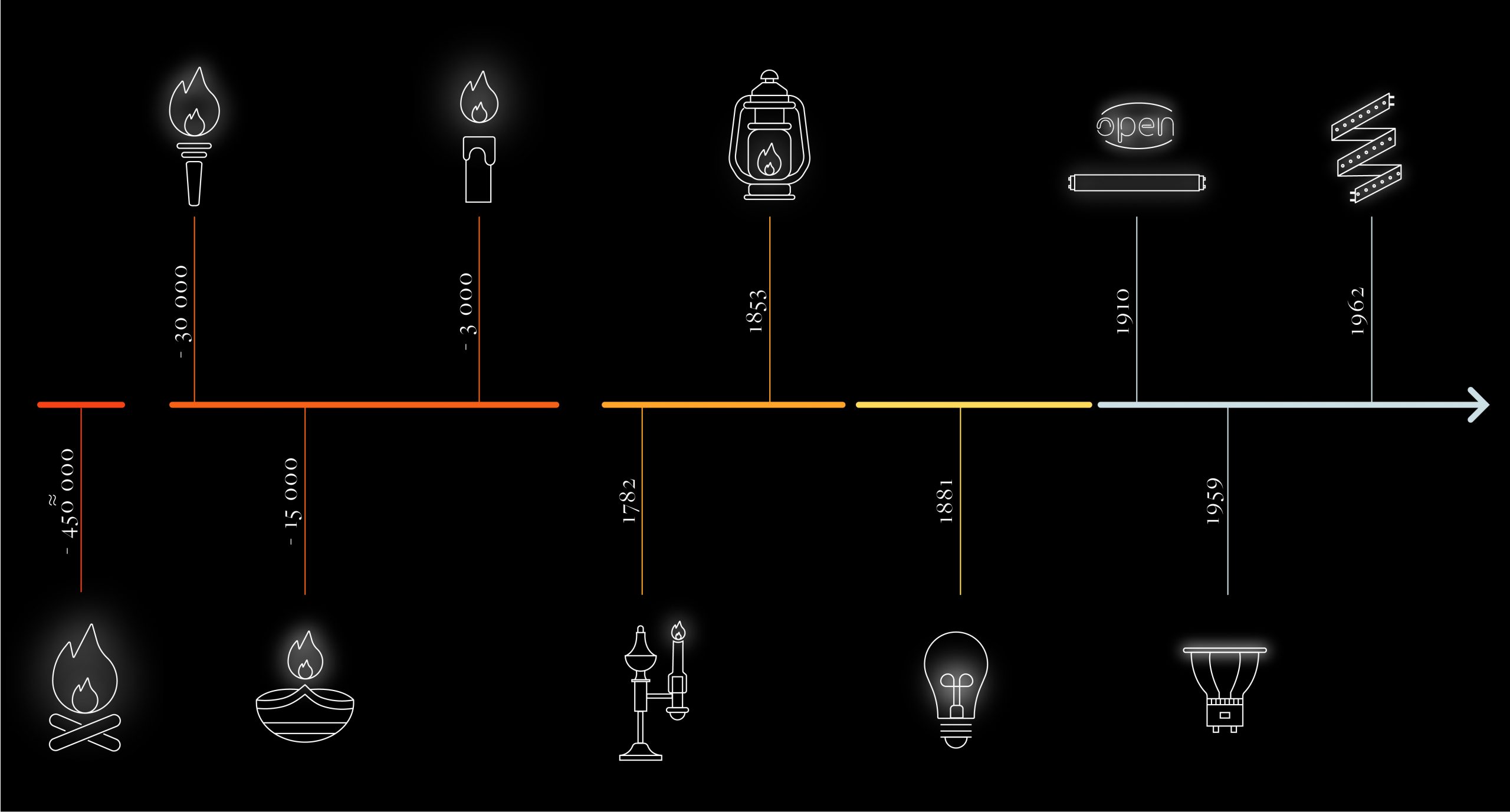 In the 21st century, artificial light has been widely used in several spheres of our societies for many years. Lighting is an essential factor in the proper functioning of cities and businesses. That being said, the need for man to light his environment is not new. In fact, we have to go back to prehistoric times to find the first lighting methods developed by man in the lighting history.

A history that starts with fire

The invention of the first method of lighting goes back a long way. Most historians even agree that fire was used for 250 000 to 300 00 years! The domestication of fire by Neanderthal man had a decisive impact on his way of life. This source of light was now going to allow them to keep predators away, to facilitate the working of certain materials, to keep warm, to cook food and to illuminate their environment once night fell. Still today, fire is used for lighting and has been the main source of light for humans for several hundred years.

Around 30,000 B.C., Homo sapien decided to burn animal fat and plant resin at the end of a branch to create the very first portable lamp, the torch. With this invention, prehistoric man could now venture into caves where natural light did not reach. By using other types of fuel to light with flames, man opened the door to the discovery of a host of new lighting options. Indeed, over 15,000 years ago, the first oil lamp was invented. This lamp was a reservoir of vegetable oil in which a wick supported by a spout was dipped. 10,000 years later, the candle made its appearance. Indeed, by surrounding a wick of animal tallow, it is possible to obtain a light source which will last longer. The disadvantage of burning tallow is that the odor and smoke are not pleasant.

Derived from the candle, it is in the Middle Ages that the candle as we know it today was born. Mainly made of beeswax, these lamps were very expensive and therefore mainly used by the clergy and the lords. It was not until the end of the 15th century that the more affluent citizens were able to start replacing their tallow candles with wax candles. It was not until the 1820s that candles regained popularity with the development of stearic acid, a new material that replaced animal tallow for candle production. This advance made candles more affordable and less intrusive, and it was from this point on that tallow candles became less common.

Although oil lamps had already existed for a long time, it is towards the end of the 18th century that this mode of lighting became trendy, with the development of new processes. In 1782, the engineer Aimé Argand developed an oil lamp with a lateral reservoir and double air currents that was 10 to 12 times more powerful than a normal candle. Later, the French pharmacist Antoine Quinquet refined Argand’s invention and marketed the Quinquet oil lamp, which was widely used until the advent of kerosene in 1853. This light oil obtained from the distillation of crude oil became the main fuel for indoor lamps for several decades and completely replaced oil lamps.

In those same years, a new type of lighting arrived on the market: gas lighting. At that time, the world’s major cities, in desperate need of modernizing their public lighting, decided to follow the lead of gas lighting in order to replace oil lamps. At the time, gas lighting cost a quarter of the price of oil, which made it very popular in Europe and America. By the mid-1840s, almost all of London and half of Paris were lit by gas! This new type of lighting was relatively dangerous, however. When used indoors, it was common for buildings to be set on fire because of the operation of this type of lamp. They raised the temperature of the rooms and had to be lit with a long stick at the end of which was a flaming cotton ball, which was relatively dangerous, not to mention the risk of explosion. In addition, gas lighting also seemed to be harmful to the environment because of gas leaks in the pipes. A safer lighting solution was now required.

The transition to electricity

On August 15, 1881, Paris, the City of Light, hosted the very first International Electricity Exhibition. A young American inventor came to present a product that would revolutionize the lighting industry forever: Thomas Edison’s incandescent light bulb. At that time, only a handful of prestigious buildings were lit with electricity in Paris. Specifically, it was with arc lamp technology, an electrically powered lighting system that was commercialized in the late 1860s. With his invention, Thomas Edison presented the general public with an invention that could democratize electric light. As early as 1881, Edison’s Company, which later became General Electric, was already manufacturing complete lighting systems including bulbs, wires, dynamos and bases.

In the midst of industrialization in Europe and North America, such a lighting system would allow industrial buildings to be lit efficiently and easily. The advantages of the incandescent bulb are numerous. It is safe, inexpensive, easy to install, can be turned on immediately with a switch and the light output is higher than gas lighting. In the years that followed, propelled by the development of electricity and the lighting needs of industrialization, incandescent bulbs gained drastically in popularity, eventually replacing gas lighting in large cities. Still present today, the incandescent light bulb has been lighting up our daily lives for over a hundred years, although it has undergone several improvements over the years.

The first half of the 20th century marks the arrival of 2 new types of lighting: the neon and the fluorescent tube. The neon will be widely used for commercial signs, because this type of lighting can be shaped to obtain writings or forms. The fluorescent tube will have a more traditional function of lighting. It is in the 1930s that the marketing of fluorescent tubes will begin. This new technology offers a white light that is close to daylight. The benefits put forward by the manufacturing companies are the low heat production, the long life, the light output and the simplicity of operation.

In 1959, a variant of the incandescent lamp was born. It is the halogen lamp. Working in the same way as the invention of Thomas Edison, the halogen lamp is equipped with a quartz glass bulb that can withstand high temperatures in which have introduced halogenated gases at high pressure. These gases increase the efficiency and life of the tungsten filament that produces light when exposed to electric current.

It was in 1962 that the first visible spectrum light-emitting diode (LED) was invented. The invention of this diode was made by Nick Holonyak, a young American engineer. For several years the LEDs were available only in red, yellow and green. In the 1990s, two Japanese researchers have developed a diode of blue color of high brightness. This invention will then allow to adapt the colors of the LED to obtain a white color that will be widely used in the design of TV screens. This invention will also reveal the potential of LED as a lighting device. Indeed, having an interesting lighting efficiency and having a very low energy consumption, this new technology will start to replace quietly the more traditional lighting devices. Today, LED lighting is available in many forms and its use is becoming widespread for public, residential and corporate lighting.

A history that is still being written

Man has always needed to illuminate his environment in order to function well in society. Depending on the availability of technology, he has had to develop his lighting methods, starting with fire and ending with LED lighting. Lighting is an industry that will continue to develop over the coming decades to meet the growing needs of consumers who are now looking for aesthetic, functional and energy efficient solutions.

Up to 10 years on some products

According to product availability

The brilliant partner behind your projects

You are our priority
We use cookies on our website to give you the most relevant experience by remembering your preferences and repeat visits. By clicking “Accept”, you consent to the use of ALL the cookies.
.
Cookie SettingsAcceptReject All
Manage consent

This website uses cookies to improve your experience while you navigate through the website. Out of these, the cookies that are categorized as necessary are stored on your browser as they are essential for the working of basic functionalities of the website. We also use third-party cookies that help us analyze and understand how you use this website. These cookies will be stored in your browser only with your consent. You also have the option to opt-out of these cookies. But opting out of some of these cookies may affect your browsing experience.
Advertisement
Advertisement cookies are used to provide visitors with relevant ads and marketing campaigns. These cookies track visitors across websites and collect information to provide customized ads.
Analytics
Analytical cookies are used to understand how visitors interact with the website. These cookies help provide information on metrics the number of visitors, bounce rate, traffic source, etc.
Functional
Functional cookies help to perform certain functionalities like sharing the content of the website on social media platforms, collect feedbacks, and other third-party features.
Necessary
Necessary cookies are absolutely essential for the website to function properly. These cookies ensure basic functionalities and security features of the website, anonymously.
Others
Other uncategorized cookies are those that are being analyzed and have not been classified into a category as yet.
Performance
Performance cookies are used to understand and analyze the key performance indexes of the website which helps in delivering a better user experience for the visitors.
SAVE & ACCEPT
Powered by